The Netherlands has a developed economy and has been playing a special role in the European economy for many centuries. Since the 16th century, shipping, fishing, agriculture, trade, and banking have been leading sectors of the Dutch economy. The Netherlands has a high level of economic freedom. The Netherlands is one of the top countries in the Global Enabling Trade Report (2nd in 2016), and was ranked the fifth most competitive economy in the world by the Swiss International Institute for Management Development in 2017.[150] In addition, the country was ranked the second most innovative nation in the world in the 2018 Global Innovation Index.[151] 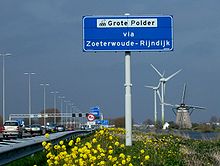 The Netherlands is a heavily developed country. Shown here is a motorway passing by a polder with a drainage windmill, and two wind turbines in the background.

In Q3 and Q4 2011, the Dutch economy contracted by 0.4% and 0.7%, respectively, because of European Debt Crisis, while in Q4 the Eurozone economy shrunk by 0.3%.[156] The Netherlands also has a relatively low GINI coefficient of 0.326. Despite ranking 11th in GDP per capita, UNICEF ranked the Netherlands 1st in child well-being in rich countries, both in 2007 and in 2013.[157][158][159] On the Index of Economic Freedom Netherlands is the 14th most free market capitalist economy out of 180 surveyed countries.

Amsterdam is the financial and business capital of the Netherlands.[160] The Amsterdam Stock Exchange (AEX), part of Euronext, is the world’s oldest stock exchange and is one of Europe’s largest bourses. It is situated near Dam Square in the city’s centre. As a founding member of the euro, the Netherlands replaced (for accounting purposes) its former currency, the “gulden” (guilder), on 1 January 1999, along with 15 other adopters of the euro. Actual euro coins and banknotes followed on 1 January 2002. One euro was equivalent to 2.20371 Dutch guilders. In the Caribbean Netherlands, the United States dollar is used instead of the euro. 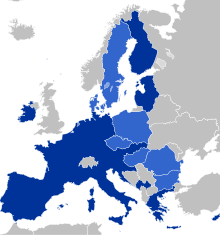 The Netherlands is part of a monetary union, the Eurozone (dark blue), and the EU single market.

The Dutch location gives it prime access to markets in the UK and Germany, with the Port of Rotterdam being the largest port in Europe. Other important parts of the economy are international trade (Dutch colonialism started with co-operative private enterprises such as the Dutch East India Company), banking and transport. The Netherlands successfully addressed the issue of public finances and stagnating job growth long before its European partners. Amsterdam is the 5th-busiest tourist destination in Europe with more than 4.2 million international visitors.[161] Since the enlargement of the EU large numbers of migrant workers have arrived in the Netherlands from Central and Eastern Europe.[162]

The Netherlands continues to be one of the leading European nations for attracting foreign direct investment and is one of the five largest investors in the United States. The economy experienced a slowdown in 2005, but in 2006 recovered to the fastest pace in six years on the back of increased exports and strong investment. The pace of job growth reached 10-year highs in 2007. The Netherlands is the fourth-most competitive economy in the world, according to the World Economic Forum‘s Global Competitiveness Report.

Please do not hesitate to contact us. We are always open to any new business opportunities.

We use cookies on our website to give you the most relevant experience by remembering your preferences and repeat visits. By clicking “Accept”, you consent to the use of ALL the cookies.
Cookie settingsACCEPT
Manage consent

This website uses cookies to improve your experience while you navigate through the website. Out of these, the cookies that are categorized as necessary are stored on your browser as they are essential for the working of basic functionalities of the website. We also use third-party cookies that help us analyze and understand how you use this website. These cookies will be stored in your browser only with your consent. You also have the option to opt-out of these cookies. But opting out of some of these cookies may affect your browsing experience.
Necessary Always Enabled
Necessary cookies are absolutely essential for the website to function properly. These cookies ensure basic functionalities and security features of the website, anonymously.
Functional
Functional cookies help to perform certain functionalities like sharing the content of the website on social media platforms, collect feedbacks, and other third-party features.
Performance
Performance cookies are used to understand and analyze the key performance indexes of the website which helps in delivering a better user experience for the visitors.
Analytics
Analytical cookies are used to understand how visitors interact with the website. These cookies help provide information on metrics the number of visitors, bounce rate, traffic source, etc.
Advertisement
Advertisement cookies are used to provide visitors with relevant ads and marketing campaigns. These cookies track visitors across websites and collect information to provide customized ads.
Others
Other uncategorized cookies are those that are being analyzed and have not been classified into a category as yet.
SAVE & ACCEPT